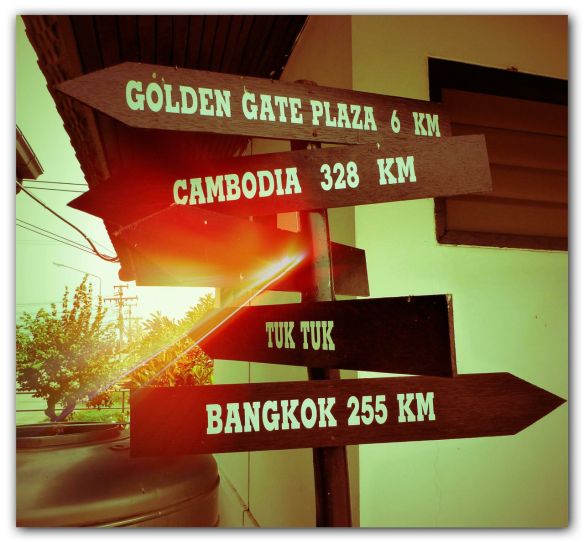 We were on the road again and had a succession of pretty arduous, sweaty and varied vehicles.

We took a car and driver from Siem Reap to the Thailand border. We were lulled into a false sense of ease as we showed our passports, we didn’t realise it was only the beginning of a bewildering bureaucratic experience. We watched people dragging massive handcarts, altercations with a crazy man, and trucks stuffed too full of pigs whilst we tried to find the right queue to stand in.

We caught the local train to Bangkok, this journey took 6 hours and we were entertained by the ‘air conditioning’ which consisted of having all the windows open full, and the remarkable variety of produce being peddled, most of it unrecognisable to us.

We’d been warned about being hassled when arriving in Bangkok but we still managed to lose Matt’s travel guitar and got ripped off by a very dodgy taxi driver. He  drove around, shouting ‘this it?’ at any hotel and a decrepit looking apartment building, I was getting really worried when he started rolling back into other cars,  then he over charged us !

The next day Matt had a Ukelele job come in, having no Uke we decided to pop across town in a tuk-tuk. We’d been lulled into a false sense of security in Cambodia where it is  a fun ride on your little chariot, this one turned out to be the tuk-tuk from hell. It was Saturday and the busiest traffic day, it was much further than we realised, and at one point were sitting in a jam of 10 lanes, breathing nothing but fumes. I was going down with a cold and feeling pretty rough anyway, this didn’t help. We found the shopping mall which was rather surreal with its of kids with cartoon t-shirts buying lots of small plastic things. The uke shop was great though, it could have been straight from Harry Potter if they’d dealt in magical Ukulele’s. Continuing our lack of luck in the transport department it took ages for us to get back, the train was just too complicated and the taxi’s kept refusing to take us. (and we’re not taking a bloody tuk-tuk!) 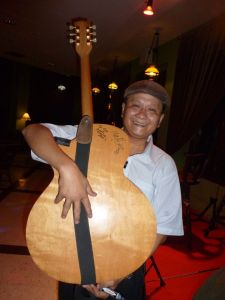 On a jollier note, Matt hooked up with the local hotel swing band, a trio of sweet smiley men. They played some great stuff, lots of jazz standards like Sweet Georgia Brown, The Very Thought of you… he was only going to do a couple of numbers but they nabbed him for the rest of the set. One of them was so excited about him, they got him to sign the back of his guitar.

Next up was the sleeper train to Chiang Mai, this was supposed to take 12 hours but actually took 16, for no apparent reason. We found our compartment which we were sharing with two rather sulky French teenagers. There was a worrying psycho-waiter with a painted white face who yelled excitedly and did jazz hands if you bought a beer, but pouted and actually stamped his foot if you didn’t want breakfast.  My cold was in full swing now and I woke in the night desperate for water. I went lurching down the carriages in my pink stripy PJ’s all the way to the end of the train. I opened the last carriage and there was a party going in full swing, complete with pumping music and puffing, swilling punters. It was all too much for me and my pyjamas and I stumbled back, and I confess swiped some water from another carriage (they had lots!)

We were grateful for our posh hotel in Chiang Mai booked in honour of Matt’s birthday. The staff sang a sweet if a little surreal version of happy birthday and brought a cake.  I had planned somewhere nice to eat for 18th, but we were so tired, his birthday diner consisted of a packet of crisps.

The next day was our memorable trip to the elephants which Matt has already written about, and then… stay tuned for more transport horror stories…