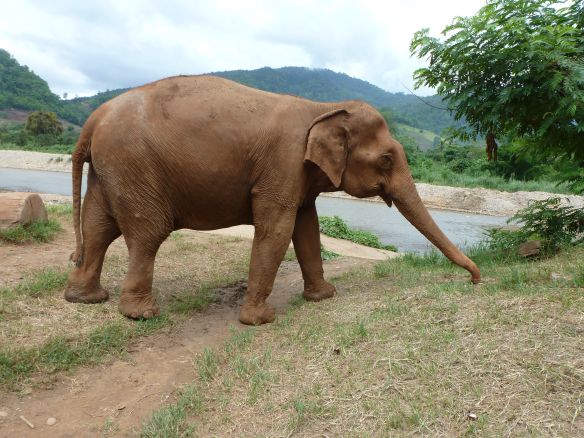 We’ve all seen elephants, those massive “gentle giants” that inhabit Asia and Africa, now seriously endangered, these noble animals are a symbol in many religions and revered throughout the world.  I remember the first time I came across them as a child at Billy Smart’s Circus on Boxmoor common in the late 60’s, giant lumbering beasts doing tricks in the ring.  Then later at Whipsnade zoo on a family day out, their huge grey forms sidling around their concrete enclosure, I still remember the awe at their presence.

Now, at age 51, I visited along with my beautiful companion and wife Fran, the Elephant Nature Park in northern Thailand.  We’d both wanted to go and see the elephants in their own country and after a bit of research we came across this place.  It wasn’t until we got there however that we realised the plight of these incredible creatures.

In Asia the elephant, apart from being a holy animal, has been used as a tool that helped build the wonderful civilisations here for centuries.  They were used as a bulldozer is used today.  A hundred years ago there were 250,000 domestic elephants used in the logging trade mostly.  Now there are only 5000 domestic elephants left in Thailand. In 1989 logging was banned in Thailand and the elephants found themselves ‘unemployed’.  Many of them were abandoned to die, others moved into the tourist industry, everywhere you go in Thailand you can find elephant trek centres. Earlier in our trip we had gone on a small trek around Bayon temple at Angkor Wat in Cambodia, now knowing better I urge you not to do this if you ever find yourself there or anywhere where there are elephant ‘rides’.

At the Elephant Nature Park we learnt of one woman’s crusade to give these animals a better life. Sangduen Chailert, otherwise known as ‘Lek’, meaning ‘small’, (small in stature, but mighty in spirit and heart) has taken it upon herself to rescue as many suffering elephants in Thailand as possible and has built a wonderful park which houses 34 rescued beasts. 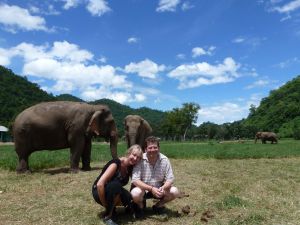 We arrived after the 60km drive from Chiang Mai into the hills and with about 100 other tourists in small groups were shown around this fantastic place with the help of our lovely and gracefully informative guide Kuon. (I think that’s how it’s spelled, apologies if I got it wrong).  We fed the elephants bananas and pineapples and the highlight was a bath in the river.  We all energetically threw buckets of water over them as they basked in seeming ecstasy in the afternoon heat.  I have never had such a rewarding experience. 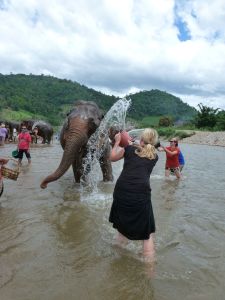 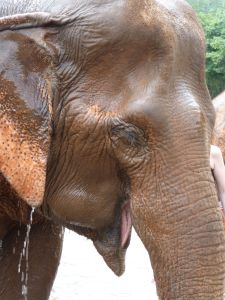 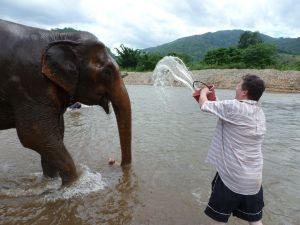 At the end of the day we were shown a documentary about Lek and the park in which we learned of the ‘Crush’.  This is the ancient ceremony the Mahouts, (elephant handlers), along with their shaman, perform to ‘break the spirit’ of the elephant so that it will take the commands of a human.  Virtually all elephants have been through this in Thailand and it is still in practice today.  In the Crush the young elephant (about 4 years old) is forced into a wooden frame only just big enough for it and subjected to days of pain and torture as it is beaten and stabbed with sticks and sharp metal implements and kept from sleeping.  It is one of the most awful things I have ever witnessed.  It is said that this is the only way that the elephant can be trained, but Lek maintains that it is outmoded and creates aggressive behaviour and other problems.  She is trying to persuade the Mahouts out of this practice, but has met with much opposition including death threats.

I felt moved to write this and to ask all of you if you might take a look at the Elephant Nature Park website to see what they are doing.  Here you can donate to help them in their struggle to help these poor animals.  My birthday has just passed and if any of you would like to give me a gift, then a small donation to the park would mean so much to me. 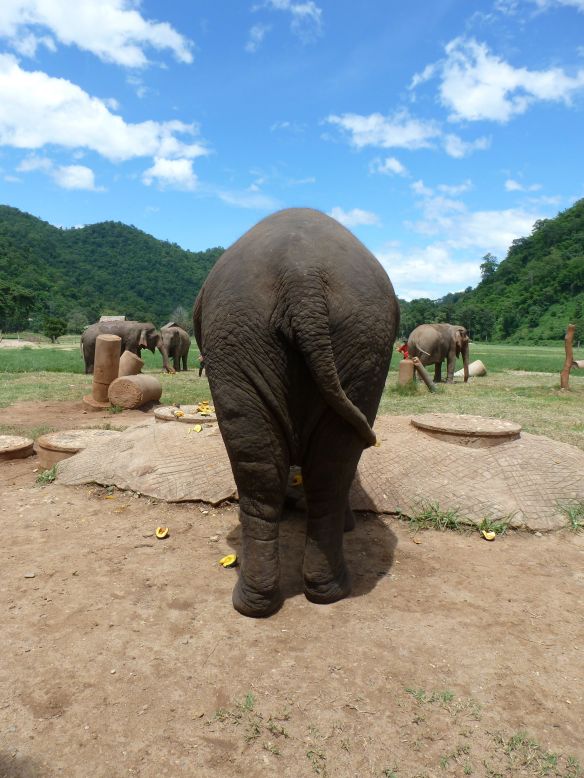