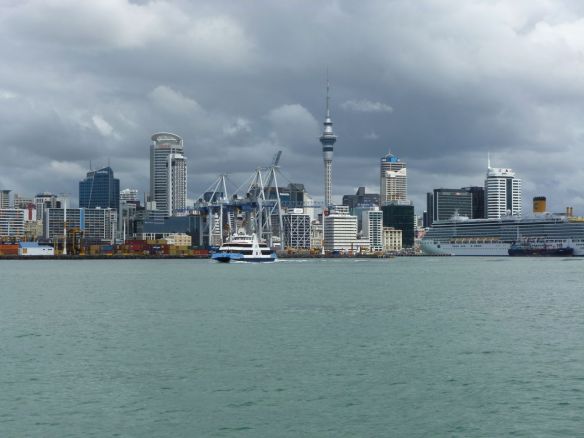 We arrived in Auckland after a thirteen hour flight having lost a day and a few hours in the process. Speaking to folks back home in the UK was a bit bizarre, our Sunday morning being their Saturday evening. It’s not the only odd thing… the stars are upside down, Orion looks most confused!

We booked into a cheap and cheerful (lime green and purple) hostel called Jucy Lucy’s where we squeezed ourselves and luggage into a tiny bunk room. We did a little stumbling around the city still pretty dazed from the flight and then bought some stuff to eat for the next few days. We were a bit dismayed to find it all gone in the morning, cleared out of the communal fridge by the over zealous staff, I was slightly suspicious about all the beer that was cleared, party time in the staff room me thinks. 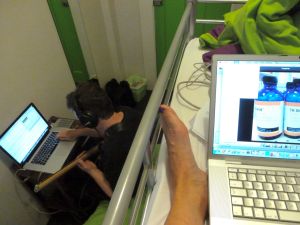 Matt landed a job when we arrived, this was a real relief as we have been doing some rather anxious dollar stretching, but it was a bit of a pain in the dong in terms of timing. There was no real space to work so he had to perch on the bottom bunk squished up facing the wall working out fiendishly complicated Cuban rhythms. I either worked on the top bunk or went out to art galleries, paying my respects to a suffragette monument (New Zealand women were the first in the world to get the vote) or wrote my blog post from the end of the wharf. 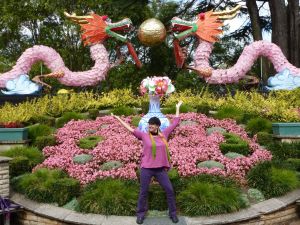 Year of the Dragon

There was a lantern festival at our local park, celebrating the Chinese year of the dragon.  It all felt very auspicious for me (being a wood dragon!) and we enjoyed wandering around admiring the elaborate lantern sculptures by day. We went again at night to see them lit, but we could hardly see anything it was so crazy busy, so we just grabbed some fish cakes and money bags (they are snacks… we haven’t taken to crime!) and got out.

On our last day in Auckland Matt un-manacled himself from the computer to come with me  to viaduct wharf where we enjoyed the fresh breeze, the impressive boats, the elevating bridge, and a huge pile of fish and chips.

Year of the Dragon

Sittin’ on the dock of the bay

1 thought on “Arrival in Auckland”